Character NPC from the Academy (from Samir's Adventure Logs)

A graduate of the Academy who specializes on potion brewing.

Sworn ennemy of Samir Goldentongue and any associates.

Theofyr was already a senior student when some members of the Mewling Quims were drafted into the Academy. The eldest son of the Lord of Namshu, a Sekunta Protectorate that has major shares in the slavery guilds, he acted with arrogance towards all students of lesser “blood” as befitting his high station. His antics and bullying were known throughout the Academy, which tended to turn a blind eye due to certain economic ties with his father, although some teachers seemed to resent the blatant favoritism in an institution that prided itself on meritocracy and discipline.

Aside from a blue-blooded clique, Theofyr was the blight of students and bullied them all with sadistic glee, often to the point of absolute humiliation or terrible, sometimes permanent, injuries.

He soon met his match with the lowly son of a whore named Samir, whose caste system indifference and casual flippancy endangered his strong beliefs in his station’s superiority. He relentlessly bullied Samir with all the tricks he had at his disposal, to no apparent effect. Those attempts even turned against him in a few cases, ending up making him look the fool instead.

Seething with rage and always thinking up new plans of vengeance, he vowed to end the life of that bastard Goldentongue.

His plans having switched from petty bullying of all students to thoughts of murdering one in particular, Theofyr concentrated his studies in potion brewing, thinking poisons to be the best option to achieve his goal without getting executed in the process.

His tireless obsession ended up making him a highly skilled potion brewer to the point of being noticed & assigned as a teacher’s senior helper, a highly sought-after position for students within the Academy. He was often asked to perform brewing presentations in front of classes, which only contributed to feed his smugness further.

After another failed attempt to humiliate Samir by publically disparaging the choice of his modest attire in the student’s dining hall and ending up being accused of bastardy on account of his lack of imagination in the choice of his insults, Theofyr took great umbrage at the insinuation of being the child of an idiot house slave and immediately left the hall to make an official complaint to the head of the Academy.

The Headmasters being out for undisclosed reasons, this did not temper Theofyr’s resolve at all, as he proceeded to spend the rest of the evening waiting for their return, fuming in self-righteousness, to the great sorrow of the secretary on shift.
What happened the next day is a matter of court record. During Theofyr’s potion-making presentation to an advanced class, a terrible accident occurred that left Theofyr permanently… changed.

An official investigation uncovered evidence of “ingredients tampering”, which caused the potion’s effect to be totally random, but also highly potent.
Theofyr argued that the sudden appearance of Samir’s snake familiar, Ssssteve, in front of him made the resulting fright and spill on his crotch area strong circumstantial proof of Samir’s involvement in this heinous crime.

The Academy found Samir innocent of the crime of ingredient tampering for lack of proof, but sentenced him to two months of confinement to his room for his carelessness in handling his familiar during dangerous procedures, as required by Academy’s by-laws.
Theofyr appeal the decision, citing bias of the ruling council for frequent bursts of laughter whenever Theofyr pleaded his arguments. The appeal was denied.

Theofyr’s reign of terror seemed to end after that and he soon graduated and went back to his father’s lands to act as an Academy agent in the region.

His new high-pitched voice made him a terrible agent and an even worse Lord’s son. The latest rumors at the Academy is of Theofyr being banished from his father’s estates until a cure is found, so he returned to the Academy, cloistered in the library, forever searching for a cure to his “condition” and plotting revenge against his nemesis, Samir Goldentongue, whom he also publically accuses of being the culprit who drew whole “roads” of invisible (but still detectable via Detect Magic, a cantrip all new students are assigned to learn and master in various outing exercises within the Academy’s halls) mage-marked effigies of Theofyr with his new… affliction, all pointing to his quarters; all starting from major public areas frequented by students. 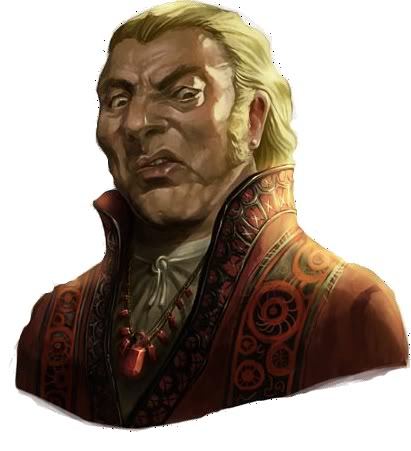