«If you are to die, die spectacularly.»

At the mention of the name, the old lanista’s eyes lit up. Priam must have had told the story a hundred time by now but he still relished every retelling. As if to jog his memory… or perhaps help his inspiration to embellish it, Priam filled his cup with wine and took a long sip.

«In my line of work, you need two types of men to put a fine show: men good for fighting and others for dying. One can find a plentiful supply of both types in the jails of the capital.

That’s where I saw him for the first time. Oh… he must not have been older than 14 years of age at that time. He did not cut the imposing figure then; a bit tall for his age but scrawny to a fault. Now a lesser lanista would have probably passed up on the kid… but I thought there was something to him. I could see the fire in his eyes… A real demon! HA!

I offered him to make the rest of his life worth remembering.

He said he would make me a frighteningly rich man for this opportunity.

I knew I had a diamond in the rough so I took my time with his training. The boy had spent too long on the street, I needed time for a proper diet to bulk him up to his potential. I had him on menial errands, fetching the equipment, serving the food to the other gladiators, cleaning the latrine… For the first year, he did not so much as touch a wooden gladius. That did not prevent him from starting his training in a way… Whenever he had a free moment, Hasdrubal would watch the gladiators train, learning by observation what worked and what did not.

Usually, a normal gladiator is taught a single gladiatorial style for six month then is sent to battle to recoup the cost his training regimen. In Hasdrubal case, my doctores trained him for a solid 3 years, in all forms of gladiatorial styles, before he saw his first battle. I spared him the suicide assignment and booked fights that would help him grow as a fighter. I had not been mistaken. The boy had a rare combination of brains and brawn, with a dash of showmanship that seemed to really connect with the crowds. He was good, very good, but still missed that defining victory that would have opened up the door of Sekunta’s coliseum for him.

Now you’ve heard of Sargon “The Thunderbolt of Šarru-kīnu”. Wielder of the famed Gwalhir, capable of slicing through armor and limbs like it was cutting warm butter. Yes Sargon, unbeaten in 16 contests, who refused his rudis on 2 separate occasion… I had been following the man’s exploits since his very beginning. It had not escaped my attention that Sargon had never fully recovered from an injury to his right arm he had suffered a few combat prior… and perhaps more importantly, his fighting spirit had dulled. The man once known for its implacable precision and celerity was now overthinking things. Now to the untrained eye this was a barely perceptible change… but on the sands of the coliseum those fractions of a second are a matter of life and death. Sargon’s fame was at his apex but I knew he was past his prime. His last couple of fights had been close run things. I saw the opportunity to use him to launch one of my own fighter into stardom.

Now Sargon, even diminished, was still a formidable foe. I was wary to pit Hasdrubal against him so early in his career. It was a gamble but, Sargon was bound to fall eventually, I was worried he would do so, and very soon, at the hands of another. I did not get where I am by playing safe… I went with my gut feeling on this one: the boy had it in him. It was his time.

Sargon had made crushing murmillos his bread and butter, his famed adamantine falchion sundering his opponent’s heavy armor with great effect… but he did not perform as well versus the lowly retiarius who wore little armor and relied on their mobility. For this reason, I instructed Hasdrubal to fight as one for this bout.

On that faithful day, Hasdrubal initially followed the game plan to a tee. Circled to his right and kept his distance. Had Sargon chase him, elude his strikes, tire him out a bit. Wait for an opening… But unfortunately none were happening. Eventually, Hasdrubal got impatient and tried to trip Sargon using his net. Sargon anticipated the trip attempt and lunged to slice the net in two… It was then that Hasdrubal saw an opening and made a snap decision, dropping his trident and closing the distance in a blink of a eye to make it a grappling match. A brilliant move! Sargon was unquestionably the better fighter of the two but as a grappler… the skill gap was less than evident… It was a close contest… but in the end, Hasdrubal managed to drive his dagger into Sargon’s throat. The crowd roared. A new champion was born.

I’ll admit that when one of the takers of Coldspire Academy requested custody of Hasdrubal, I had mixed feelings at letting him go… It certainly took the wind out of my sail because after his victory over Sargon, the offers had been pouring. A promising career entertaining the crowds of Sekunta and good paydays were left on the table because of it. But at the academy… they really could take my boy to the next level… Sculpt him into a paragon of swordsmanship and wizardry…

I am telling you; if he comes back in one piece from that god accursed place, he’ll become a legend in his own right…»

In one motion, Priam finished the rest of wine cup. 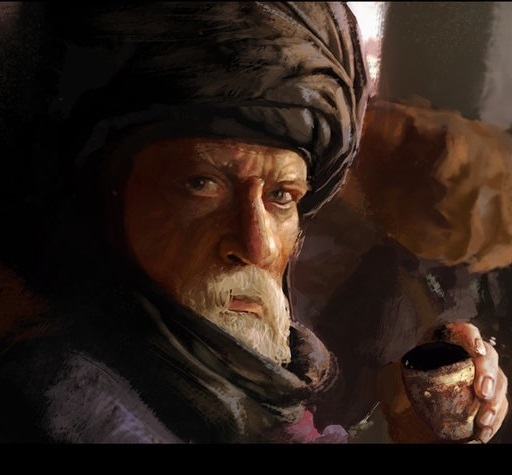